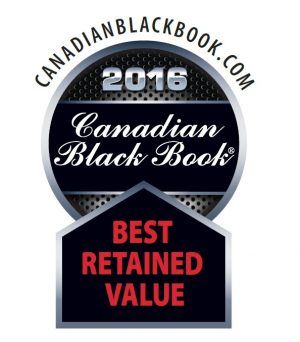 When people talk about a "perfect storm" happening it usually refers to a set of circumstances coming together to result in something pretty bad happening. However, there appears to be a perfect storm occurring in the North American auto market that is turning out to be anything but bad news for Canadian truck and SUV owners. That's because a combination of the Canadian dollar being lower than its U.S. counterpart, a relatively stronger economy in the United States, and growing demand as a result of low fuel prices is driving up the residual values of Canadian trucks and SUVs.

Although all those factors would make most industry observers expect residual values of Canadian trucks and SUVs to strengthen, there's now conclusive evidence that this phenomena is very real and is definitely happening right now. That evidence comes in the shape of this year's Canadian Black Book Best Retained Value Awards, which recognize the models that are four years old and have retained the highest percentage of their MSRP across 20 different categories.

These economic circumstances have now contributed year-over-year to an overall 6.3 percent drop in depreciation among the 11 trucks, SUVs and vans that either won or were placed in this year's Canadian Black Book awards.

It's all well and good talking about overall percentages, but nothing brings the point home better than what these circumstances have meant to individual vehicles. Perhaps the greatest example of the current situation is the Jeep Wrangler, which has managed to retain a simply staggering 79 percent of its original MSRP after four years. That's 10 percentage points higher than it was last year and now represents the highest recorded retained value ever seen in the history of these awards.

Brad Rome, the President of Canadian Black Book, said of the results, "American dealers have found new demand in the U.S. and more buying power in Canada, creating a desirable sellers' market here. With a low dollar and sluggish Canadian economy largely due to poor oil prices, it can be hard to find positives anywhere. But I can say that for several segments the used vehicle business is healthier now than it was a year ago. It's smart to take the time to get educated on values."

A major milestone for the 2016 awards saw FCA win in the Full-size Car category with the Dodge Charger, which is the first victory ever by any domestic model in one of the four mainstream car segments. As if that wasn't enough good news for the U.S. auto giant, the Dodge Challenger was also the winner of the Sports Car category for a very impressive fifth consecutive year.

These record high retained values can partly be attributed to the 200,000 used vehicles imported into the U.S. from Canada during 2015. Unsurprisingly, the hottest commodities when it came to used vehicles being sold over the border were trucks and SUVs, according to leading automotive analyst Dennis DesRosiers.  Check out our current inventory of Jeep Wranglers here.